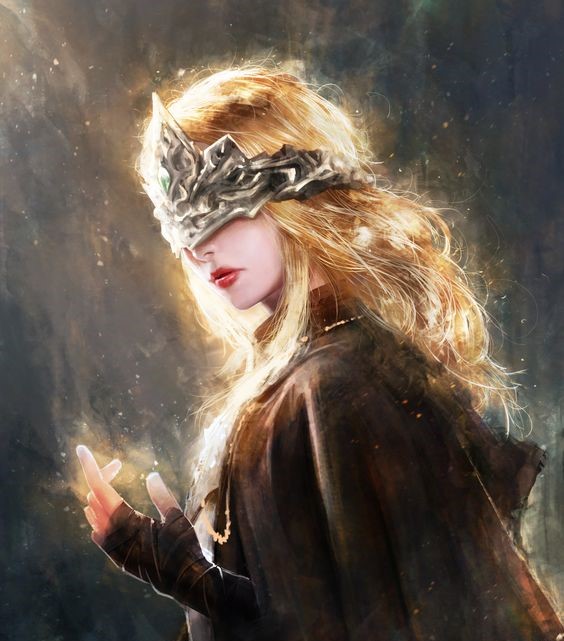 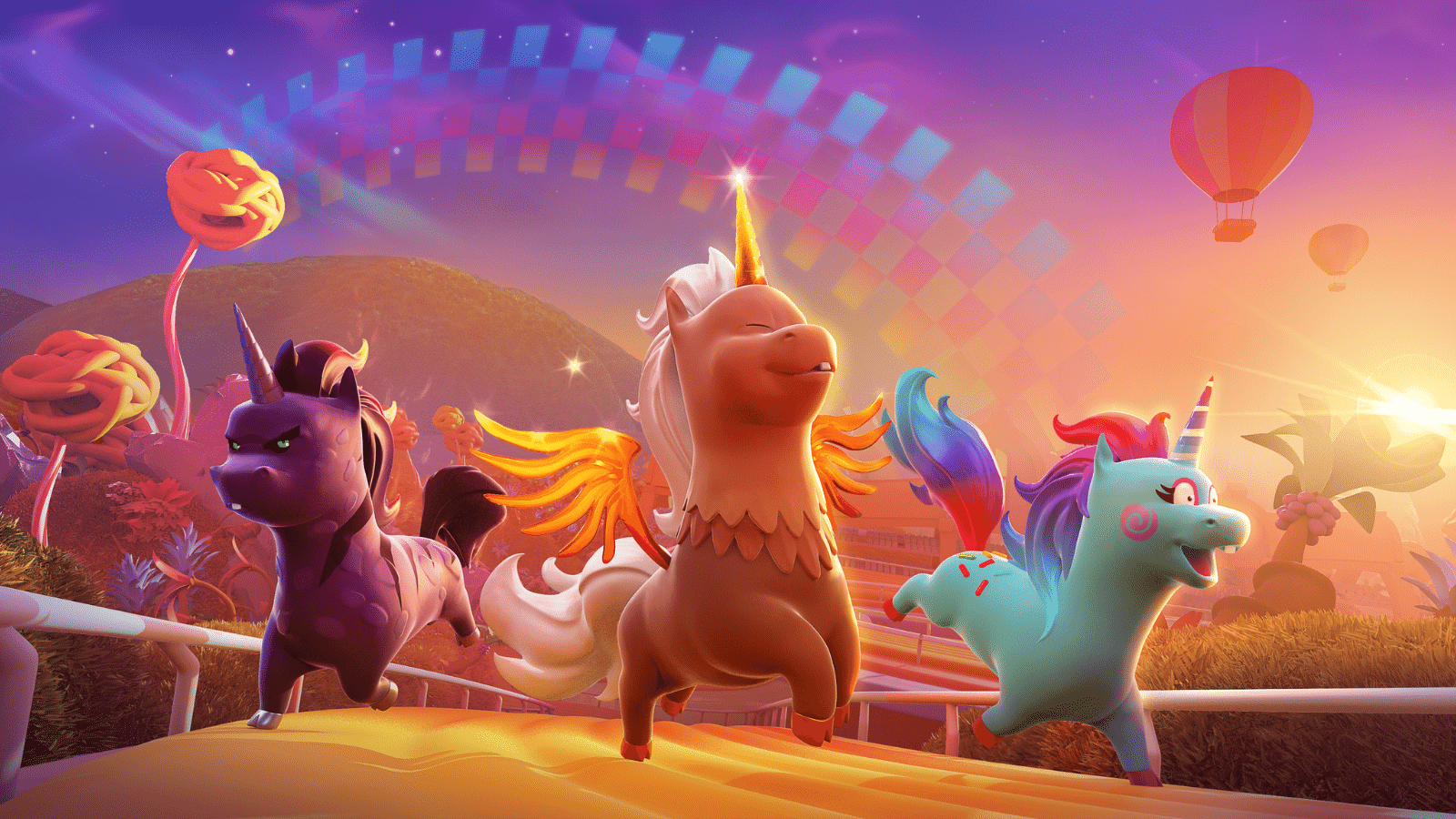 A glimpse into the game set in the Unicorn Multiverse

Figure 1: Berries grow from seeds planted by the players or their unicorns 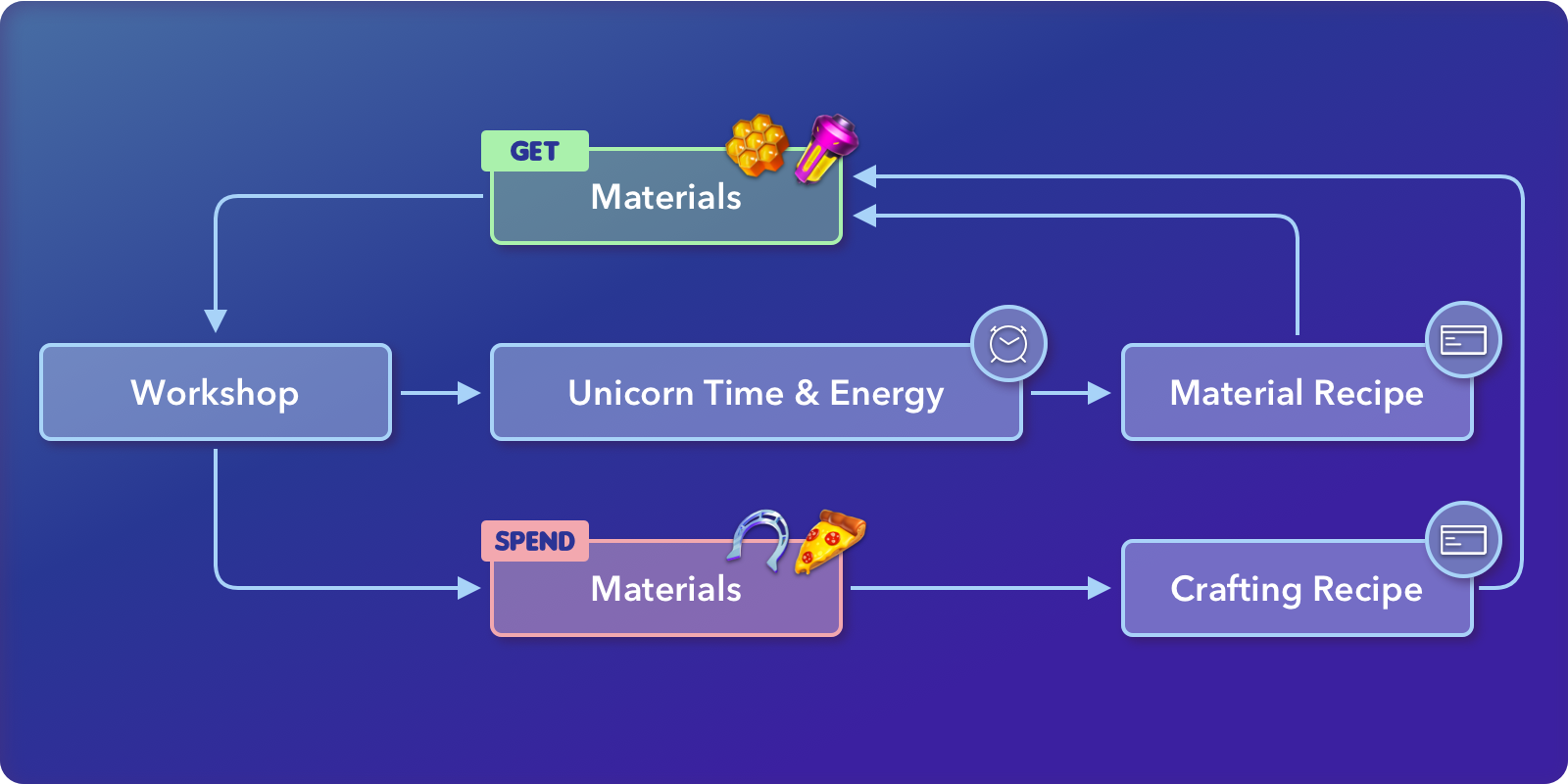 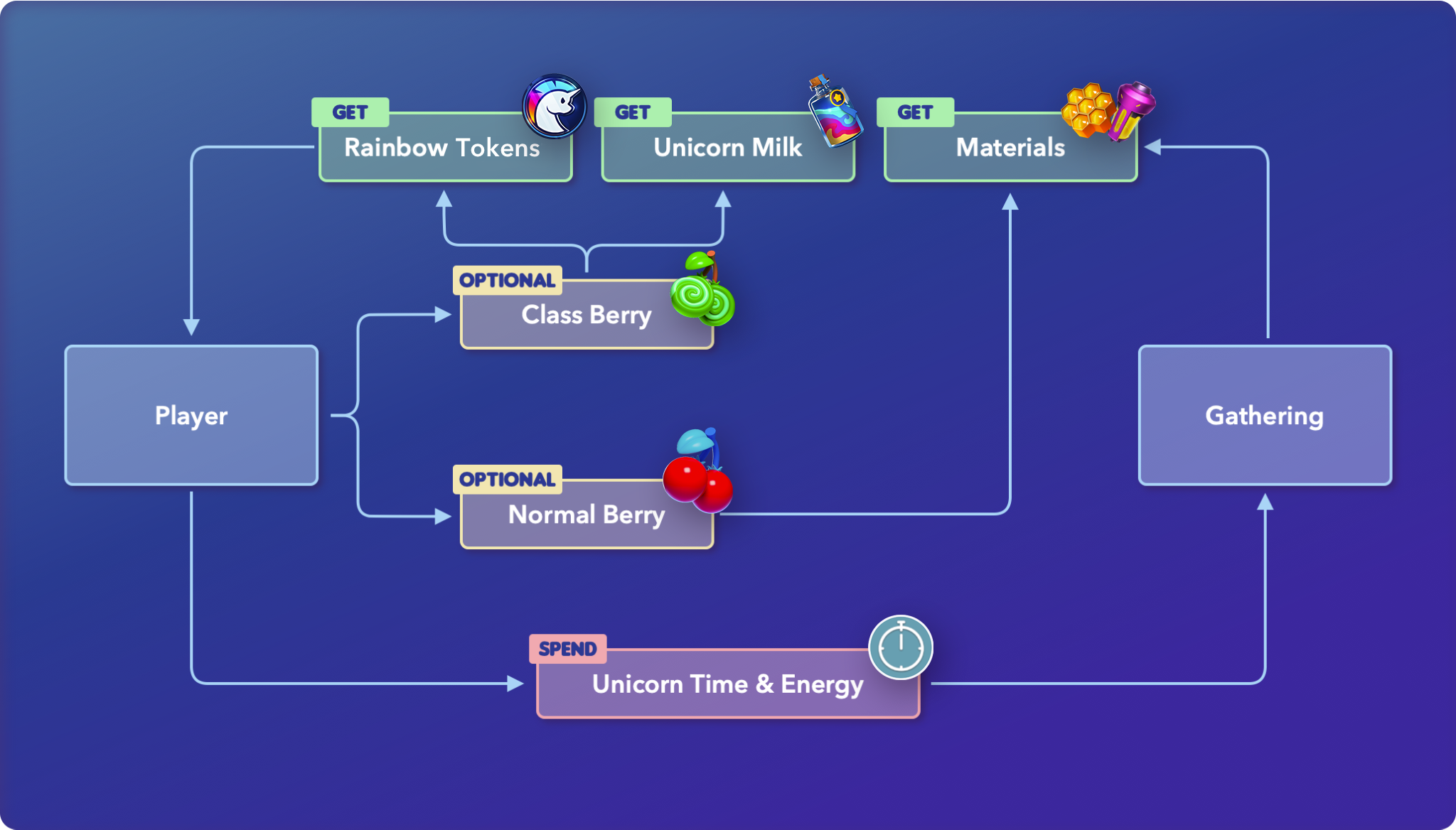 💡Matching unicorns with land is important since each land has a class that corresponds with a particular unicorn class. When these are matched, players will get a bonus of more advanced materials and more berries, which leads to better output when crafting.

💡Another feature of the game called Neighborhoods will be released in near future. As farming gameplay involves players purchasing Land NFTs, individual units of land can be combined by players into neighborhoods designed for highly social multiplayer gameplay. Players can customize their Farms and neighborhoods and show them off to the world. This feature will allow people to optimize for shared adjacency bonuses to collectively maximize their productive output and help the project to distribute epic live events to entire player base in real-time.

This will be team RPG game with both PvE and PvP modes. This feature is still under development and will be available in Q4/2022.

💡Crypto Unicorns is diverse in game modes and has a dynamic play-to-earn mechanism with several ways to reward players including harvesting berries and selling them on the market; gathering on land crafting, breeding, evolving, and building materials and selling them on the market; harvesting and crafting materials; entering race, jousting events and tournaments; PvE and PvP battles. The game’s design might be a little ambitious, but players will never get bored with it once the team pulled this off. We are looking forward to the full version of the game which will be released this year. 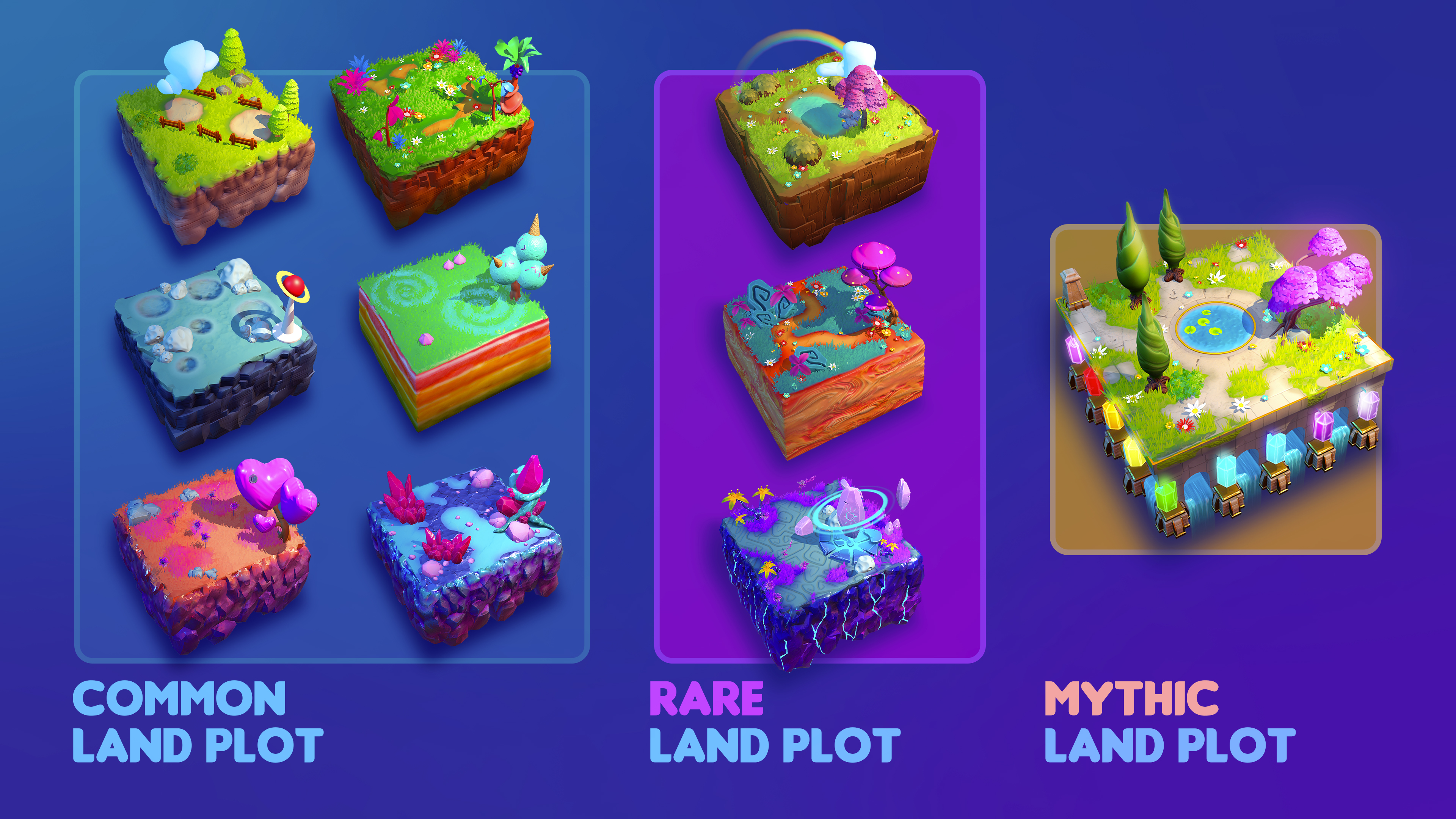 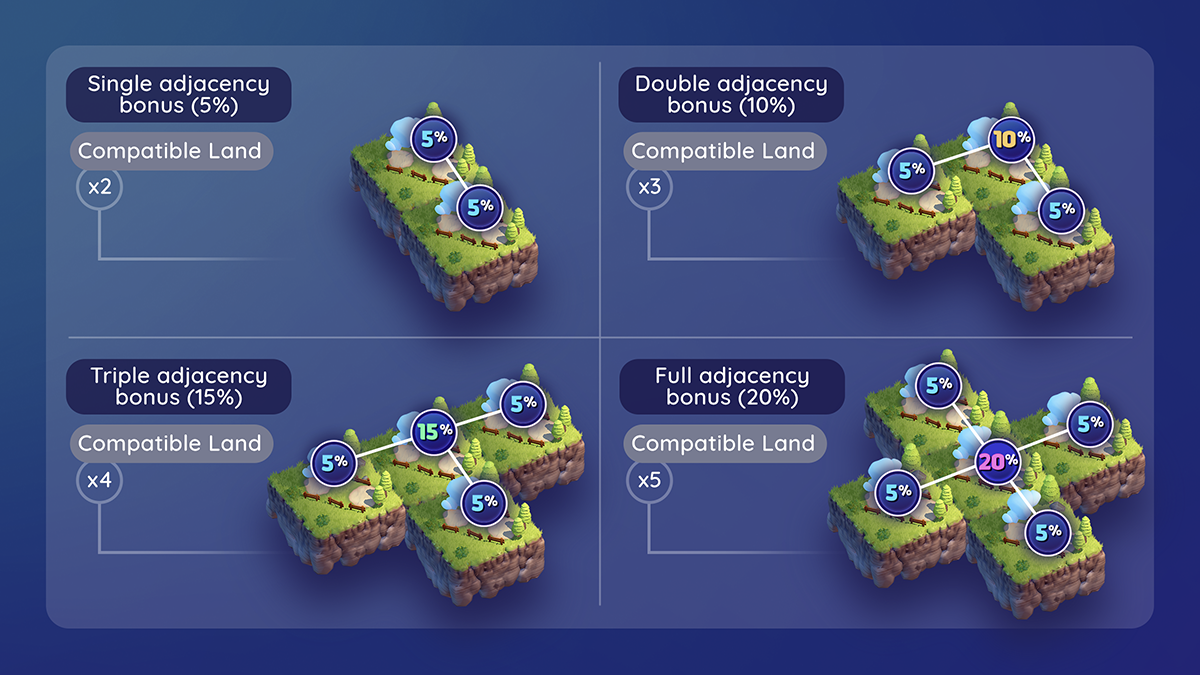 💡CU is creating a strong set of NFTs that are not only useful in the game itself but also a variety of other games to be built inside the Unicorn Multiverse. This will increase the utility value of Crypto Unicorn NFTs in the long run and encourage players to continuously create new NFTs. At the moment, players cannot personalize their unicorns or land. This feature will be added in a future update.

💡In Rainbow Marketplace, players can buy or sell a given asset. Price will go up when there’re more buys, and go down when there’re more sellers. This could be linear or exponential; either way, it creates parity and incentives to drive utility to all types of materials. 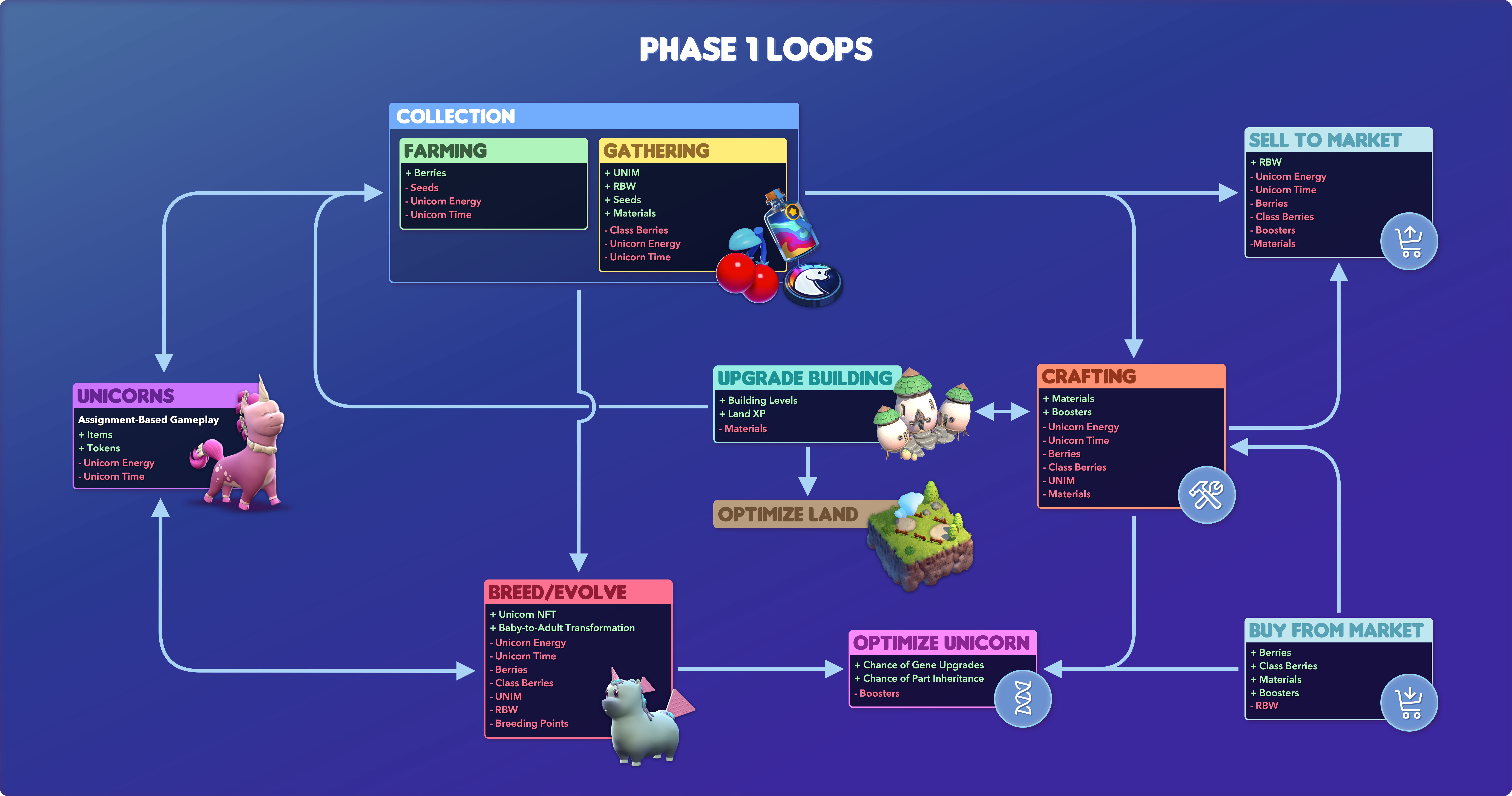 💡Each of the game loops in Crypto Unicorns heavily relies on the others, from breeding unicorns, farming berries, crafting items, gathering materials to trading these resources on marketplace. Thus, the game offers robust active gameplay with high earning potential. This requires the players to deeply engage in the game to generate as much income as possible.

Table 3: Inflationary and Deflationary factors of $RBW and $UNIM tokens

💡$RMW is designed to be not only governance token but also the only currency used in the Rainbow Marketplace. Thus, $RBW utility is diverse and there will be a lot of demand from all areas of the game as it might increase the value of the token in short term but not in the long term. 5% of $RBW will be released via public sale and airdrop and more will be released after this amount is staked. Since $RNW supply is fixed and will be constantly re-selling into the market as people use it in the game, the token will not accrue any value because there’s no burning mechanism. Therefore the inflation rate of $RMW will be very high, with no reason to hold the token long term. 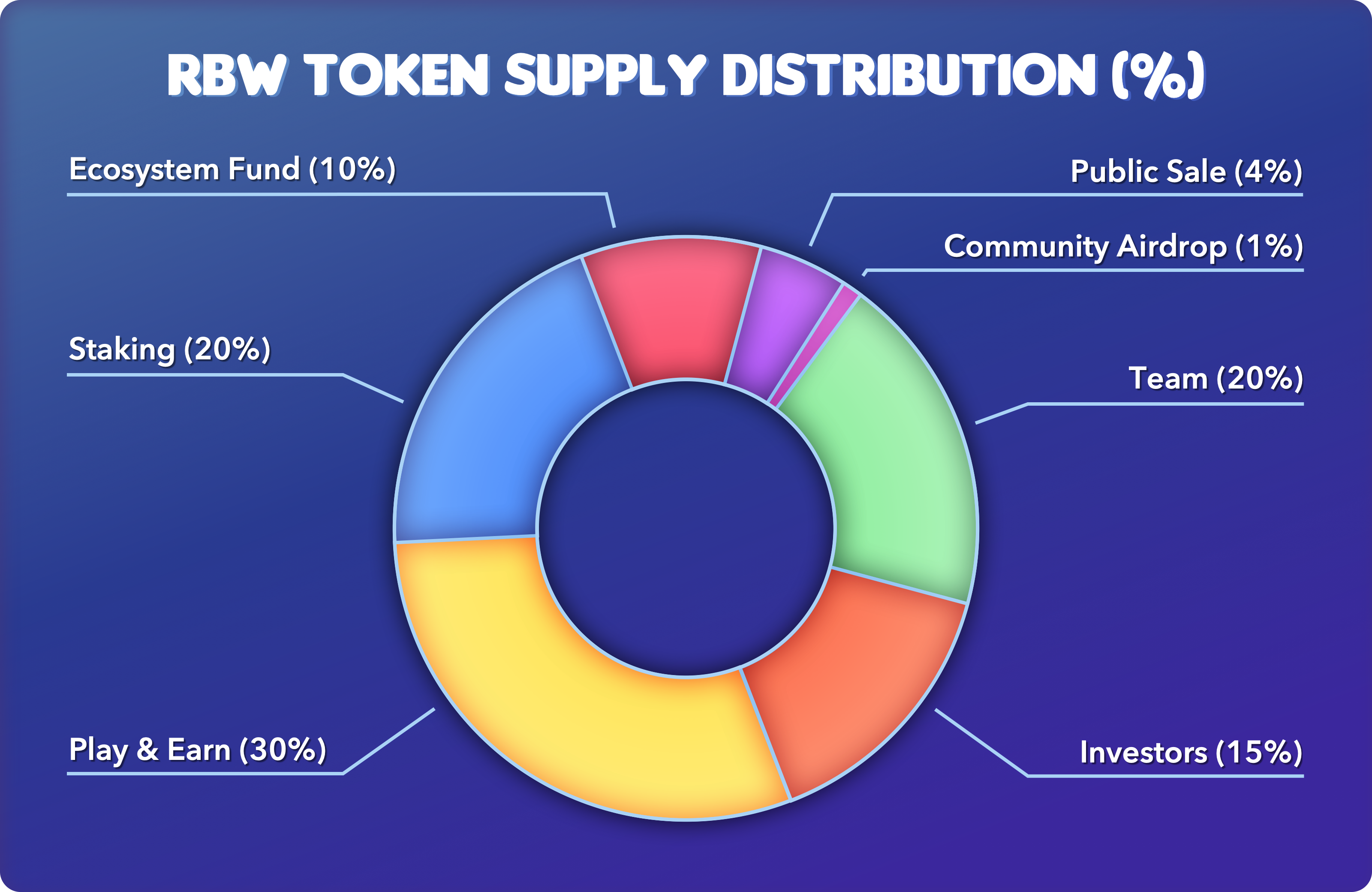 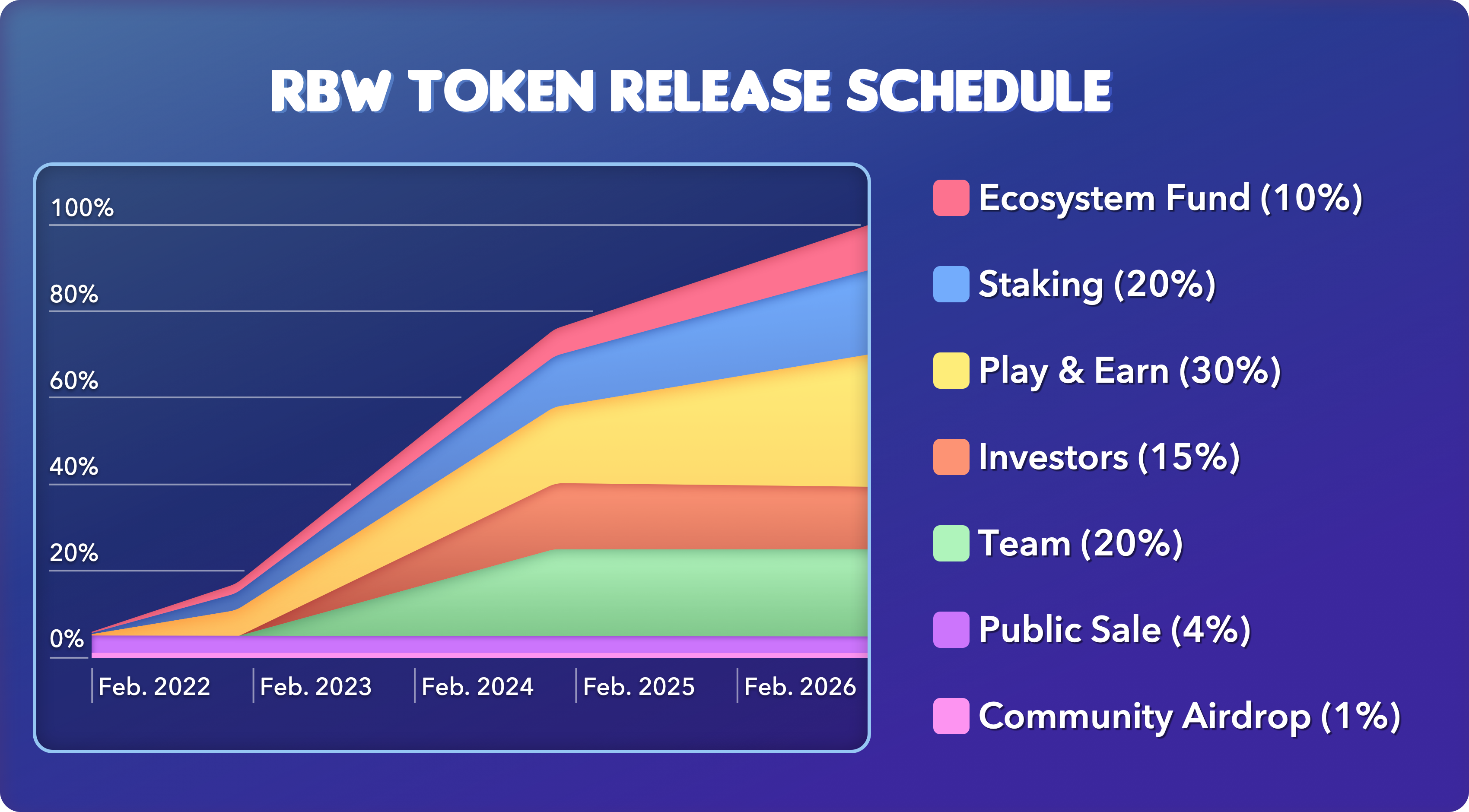 Crypto Unicorns is developed by Laguna Games, a world class studio made up of 57 industry veterans from around the world. The team is passionate about bringing daily moments of joy to community and seek to deliver high-quality entertainment on a massive scale.

💡The backing and trust of many big names in the blockchain gaming and web3 together with the enthusiasm and confidence of the whole team will help Crypto Unicorns to focus on building a great game for players and leverage their experience and insight to build a truly cutting-edge experience and community. 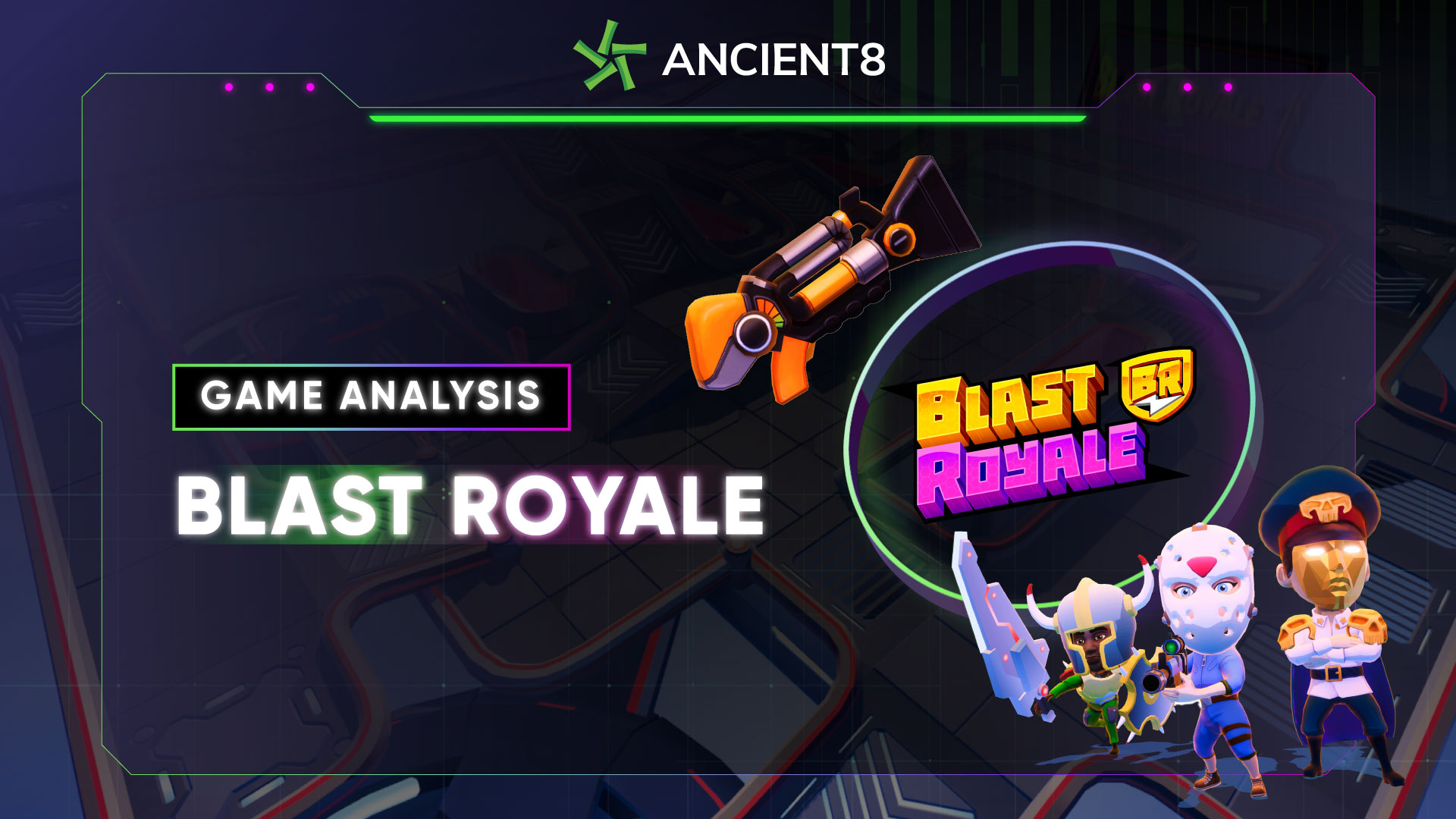 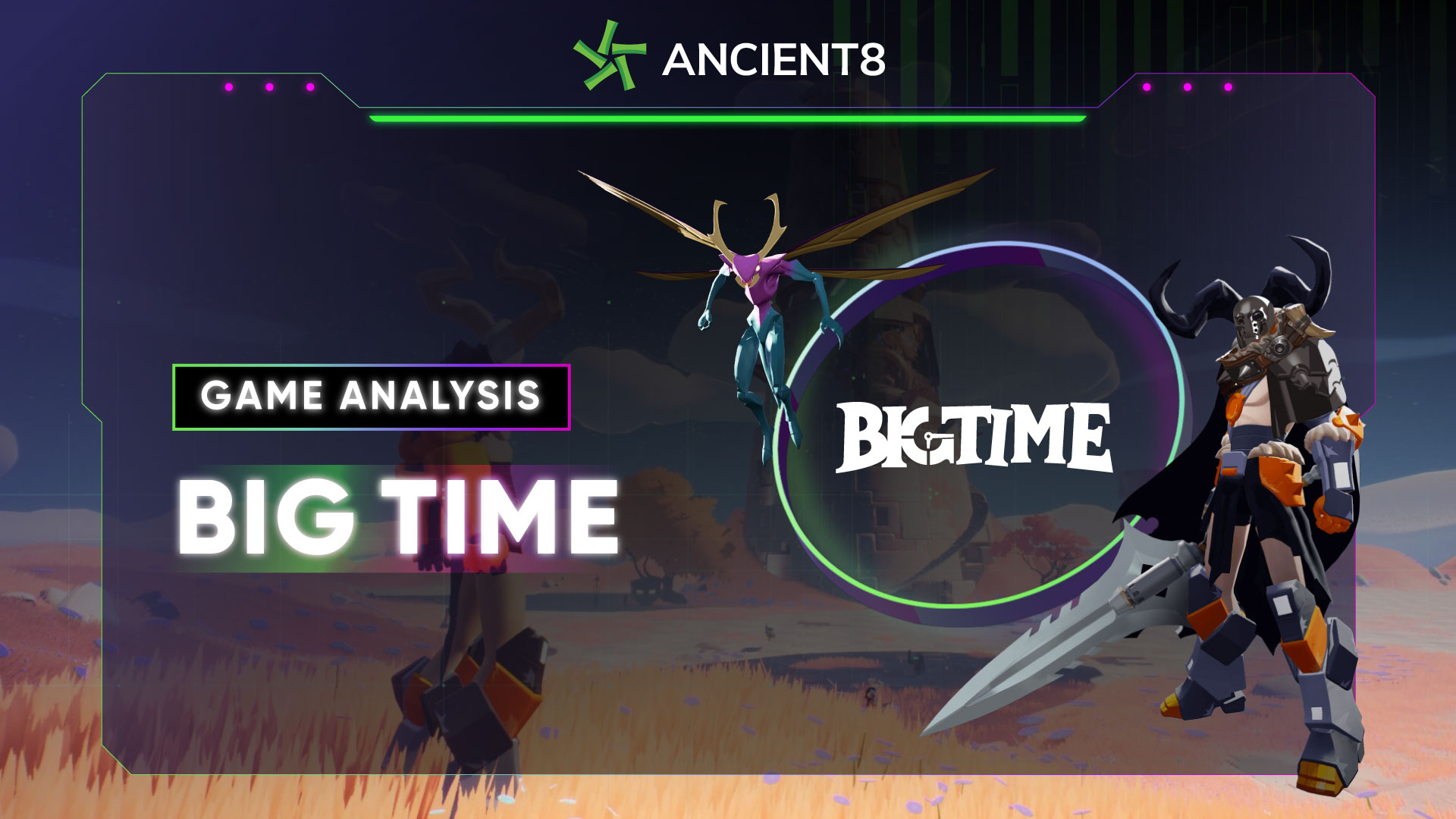 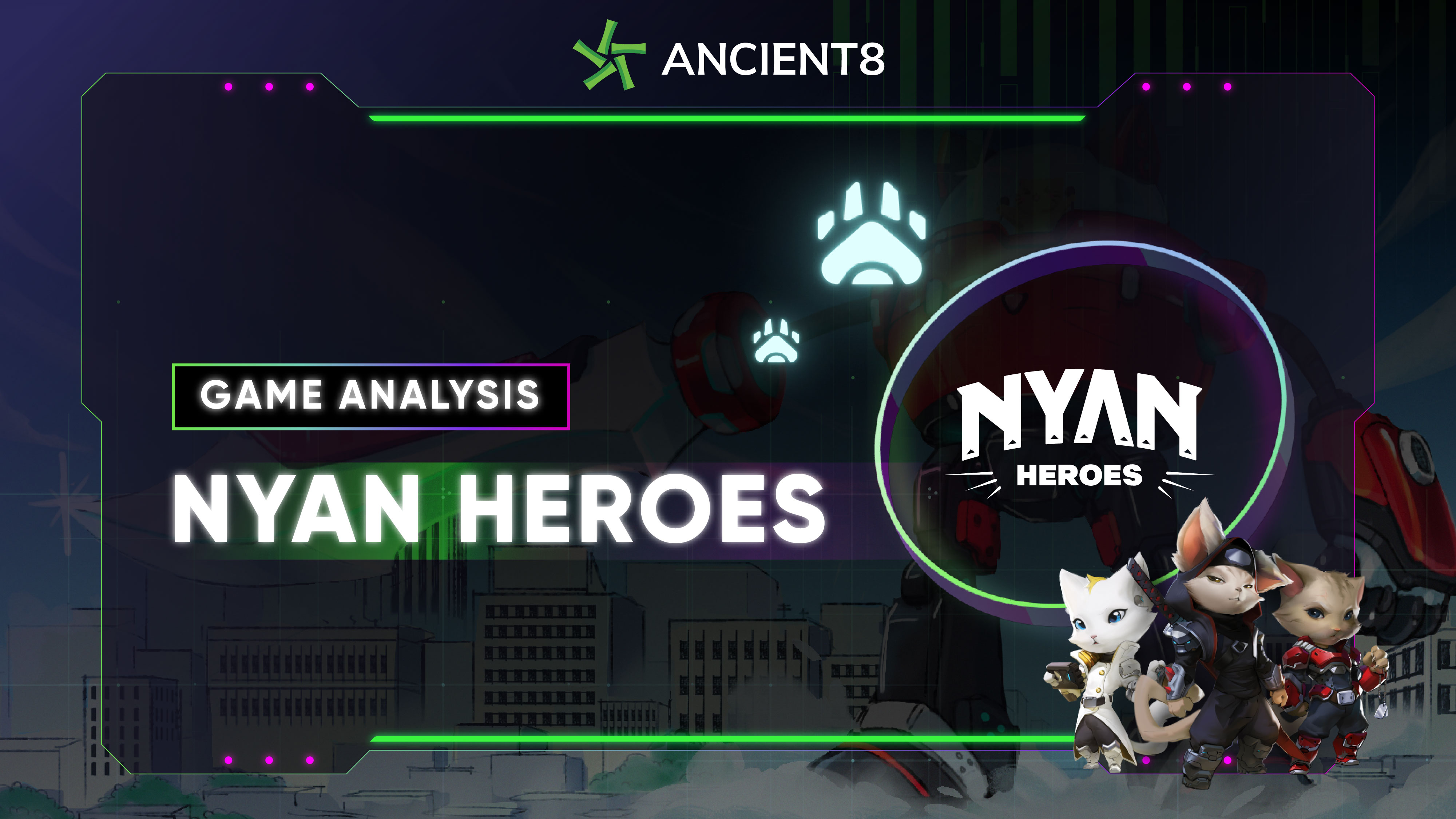 Nyan Heroes
Nyan Heroes (NH) is a 3rd person NFT shooter built on Solana. Players can collect Nyans and their robot mechs and earn rewards through PVP battles in the NH metaverse game world. Players can play for free in PvE mode, but their experience and progress will be limited without owning and upgrading their own NFT characters.
Đón đọc các bài viết mới nhất từ Ancient8 Research!
Đăng ký
Join Our Community